EditEngine is new infrastructure for creating and editing objects. Maniphest and a number of other applications have switched to it and reaped great rewards; Differential has not yet. Some of the benefits include:

T10967 should probably happen before/during this.

This is currently a large amount of work with few direct benefits. 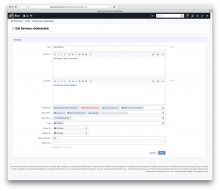 JIRA actually seems fine: arc, web UI, and both the integrations (link / post) work properly for me at HEAD of master.

So should Arcanist be modified to just call differential.revision.edit directly then?

So should Arcanist be modified to just call differential.revision.edit directly then?

Yes, sort of, but likely alongside T10945 and other Arcanist changes (referenced in T12010, but not yet organized there). There's generally no urgency on this because I think differential.updaterevision has no interesting code unique to that method anymore, and should have even less by the time the move to EditEngine completes.

differential.revision.edit does not yet support the "update" operation (or some other operations) and I may want to change its semantics somewhat while implementing it. Two related issues are:

It also only has reclaim, abandon, close, reopen, plan, request, and commandeer support in my local working copy, slightly ahead of HEAD. It has approve, reject and resign nowhere.

I'm going to dump everything into master now because I believe any disastrous brokenness should be reasonably easy to fix at this point.

I think this might have broken one of our Herald rules. The rule in question is an Object rule for Commits on a Project and will open an Audit whenever a commit is made to a repository that's tagged with this project.
At least it did ~2 month ago and after the upgrade it just won't fire. Just using the test console on a new commit in a repo tagged with the project simply says "Rule failed".
To make sure i already removed all the other conditions from it so it only states "always".

If you'd like us to look at it, please file a separate bug report with reproduction instructions, following the guide in Contributing Bug Reports.

I think we've ended up in a fairly stable place here, and remaining work generally has existing tasks motivating it in terms of features (like T10967 for reviewers, T10574 for acceptance rules, T2543 for revision states, various tasks for inlines, T9713 for commit message parsing). Obsoleted transaction types also need migrations (but they should happen alongside the migrations that other features require so we're minimizing the number of weeks with migrations that need special planning) and this dumb mess got left in PhabricatorModularTransaction.php and will probably be there for an uncomfortably long time:

...but overall I think we're in dramatically better shape than we used to be.