See T12876. arc land currently can not build a completely empty commit to squash-merge onto. This sequence should be possible, just difficult.

See PHI1646, which was a request for lower Git upstream precedence. 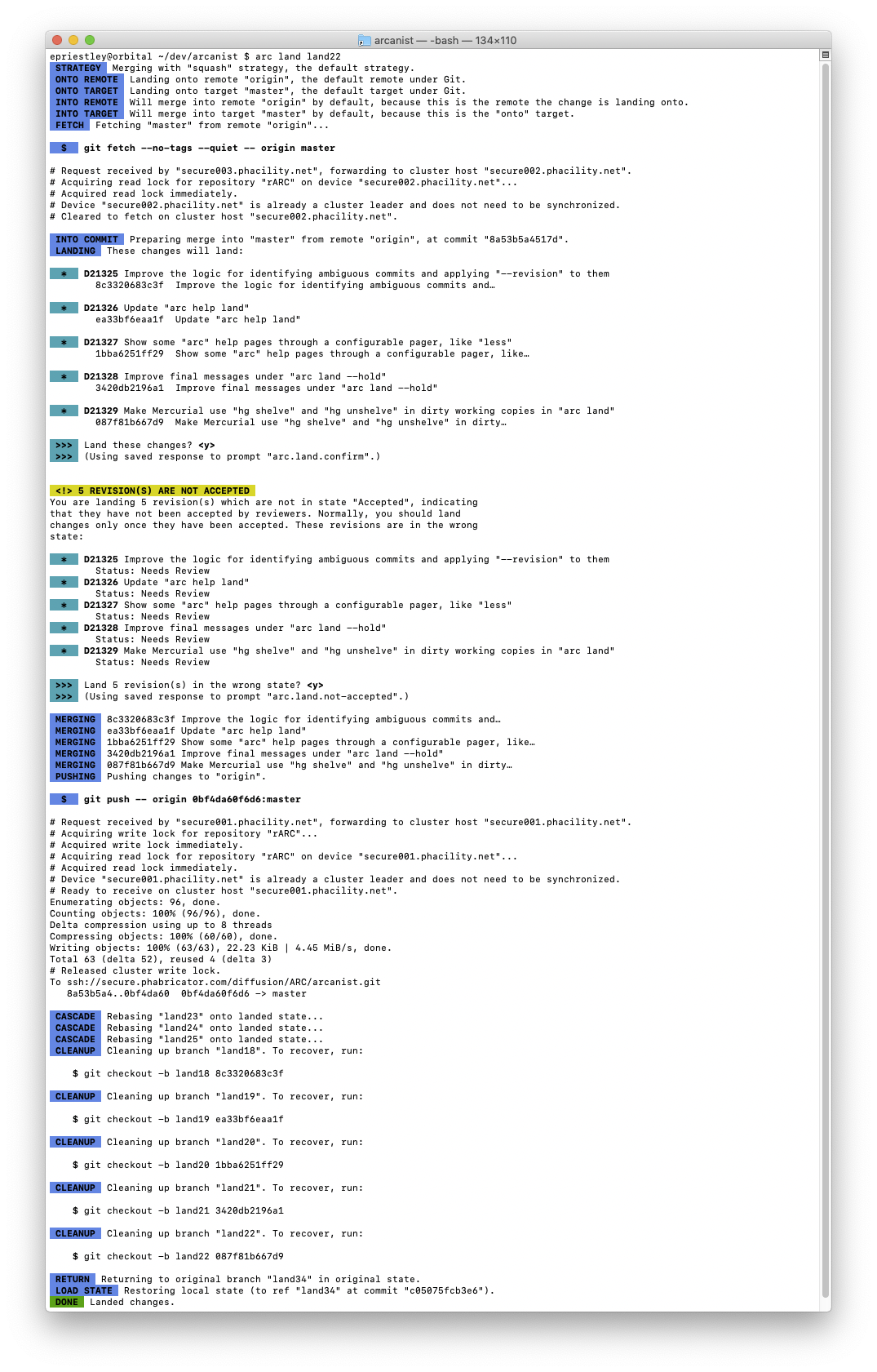 The major issue I'm trying to deal with now is that if you have a tree like this:

...and you arc land C, we'll land A, B, and C. However, if A, B, or C are not the most up-to-date version of those changes, we might land older code than the user expects.

In the case where the user explicitly typed arc land C and older code lands, I think this is not terribly bad: they at least very clearly told us to do something and we did exactly what they asked. Still, in all cases we can compare the set of changes we are planning to land to the last diffed set of changes and raise some basic warnings (notably, if the revision has a different set of changes and was updated more recently than the local changes were committed). This is straightforward.

The less straightforward case is when A or B is out of date, but a newer version exists somewhere else in the working copy. We'd like to find this A[2] or B[2] and land that instead. Often, this looks like starting here:

...then you git checkout A and commit a fix:

..or git checkout A and amend a fix:

Finding these commits is challenging in the general case. We can only really expect that:

Reachable: They're reachable from some repository marker.

Although it's possible to update A on a detached head and save the hash on a sticky note, I think it's unreasonable for users to expect we'll find it. We can reasonably say we'll only look for commits that are ancestors of some marker (branch or bookmark).

Authored after A: Any commits we find should have an author date later than the earliest author date of any commit attached to the revision.

I don't think we can make any stronger claims than this in the general case, because users may have mutated or rebased their working copy; may push anything to any remote at any time, etc. Signals like commit date, author date, presence in remotes, Mercurial draft phase, git upstreams, etc., can not be used to exclude markers or commits in the general case.

But this means we have to search back from every marker in the repository, and can't stop our search until we (a) find a single GCA or (b) all active cursors have author dates older than the oldest author date of A.

In the general case, we can't even cache this work. If we examine the history of commit X and find it has no revision at time T, then the user runs arc land again later, there is no guarantee that X isn't mapped to a revision at time T + 1: the user may run arc diff between the two invocations of arc land.

After we find A in history, we can ask Phabricator if it knows of a newer A, then look for that newer A. But this is not reliable in the general case because the user may have local updates to A that they haven't sent for review yet.

We can let users configure marker patterns for markers which never contain newer changes. I dislike this because it adds more configuration, the configuration is complex, there's a "right" and "wrong" value for it, and I suspect users may believe that arc should be able to figure it out even though I think it can not.

So I think the logic looks like this, mostly similar to today:

The new piece is:

This is fairly awful, but probably not impossible.

A related issue is that it is difficult to identify the set of "published" hashes in the general case. We would like arc branches to show all unpublished history, but stop at published history.

When we recognize a remote as a Phabricator repository, we can safely use any refs in that repository which are configured as permanent refs: the install has told us they are permanent. But things become difficult beyond this. Without a way to do this, it's hard to make the arc branches tree work even plausibly well in many cases, although perhaps I can just degrade into skipping revision resolution beyond some depth.

See PHI1807. At time of writing, arc land can delete the local master if you land it onto itself. This isn't a big deal (it gives you the command to get it back), but not intended and undesirable. Although it isn't recommended, arc land is supposed to support working in master and landing master into itself.

arc has three phases of local branch updates. The first two may run incrementally (with --incremental); the third is a finalization step which runs at the end.

Currently, the "cascade" step skips branches which point directly at the heads of ranges which landed, with the expectation that we will "update or delete them later".

The "prune" step then deletes all branches which point at landed heads.

The "prune" behavior is likely fine if the "cascade" step updates these branches.

The "reconcile" behavior is likely fine too, although it may need a messaging change and a short-circuit in this case.

So when do we retain branches?

A small subset of users use git checkout -b feature1 origin/release-1.2.3 (so their local feature branch may have no local ancestors) and then possibly set the branch upstream to point somewhere else. This looks like a "master" and quacks like a "master", but is not a "master".

A practical rule for retaining a local branch is probably just:

This is straightforward, at least.