Various interests are served by abstracting diffs and diff presentation so that the unit of change is a "block" rather than a "line of text". An immediate application is sensible UI diffing of Jupyter notebooks. A related application is more scalable prose diffs.

This is not conceptually hard because we can transform a "list of blocks" into a "list of lines of text" by hashing each block (and this is what diff does internally anyway, more or less). There's just a lot of mapping and separation of concepts ("block content" vs "block hash" vs "text line"; "line number" vs "block identifier") that are currently conflated.

There may be some technical limits later -- for example, inlines are associated with a numeric "line number", not a freeform "block identifier". There may be a path out of this with clever mapping. In the case where the block is a 3D model and we want to attach an inline to a vertex or something we probably can't just do clever mapping, but this is a different flavor of abstraction; for now, we're only going as far as block lists with a well-defined one-dimensional order.

There's a support issue somewhere about inline on specific offsets within a line which might arise here, but hopefully that can be scoped separately. The ideal abstraction is that inlines have a "block identifier" (normally, a "line number") and then a separate "location within the block", which might be "characters 9-13" for a line of text or "<12, 34, 29>" for a 3D model.

My planned path is:

Then, in whatever order is easiest -- these steps don't have obvious dependencies:

In an effort to "do no harm", I'm planning to add a "Render with Document Engine..." option to the View Options dropdown next. This will let you (for example) view a Jupyter notebook as a raw source diff if you want, if the "fancy" diff is broken or unhelpful for some reason, so you always have an escape hatch back to a lower level representation.

Jupyter as blocks, no diffing or inlines yet: 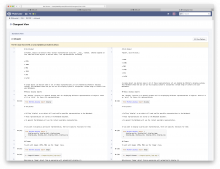 I think the major remaining issues are:

Oh, and maybe lack of source code intraline diffs, although that's likely not too much work.

Context isn't automatically unfolding around inlines, but should.

The bulk of this work is done and I think there's nothing unique and actionable left here. This is survived by T13642 and other issues.