Adding a CC to a Maniphest Task should give View rights for that user
Closed, ResolvedPublic
Actions

right now when you assign a Task to a user that has no access rights per the current Visible To/Editable By Policy, then view and edit are granted automatically to the user upon assignment.

A similar thing should happen when you CC someone. That user should be granted View rights on the task (this already includes the ability to comment).

Right now nothing happens, although it is implied by the Assign behaviour.

Since this will impose some performance cost (according to @epriestley), then it might be better to make this into an opt-in feature burried in Maniphests config?

See also T12952 for a case where a user wants a reviewer to have view rights regardless of view policy.

Duplicates Merged Here
T6463: Differential allows adding a reviewer who does not have access to it

Generally, I'm on the fence about this. The way it works now is a bit confusing, but making subscriptions imply visibility means we have to load subscriptions for all subscribable objects every time we do visibility checks, which is relatively costly. I'm also not sure that it's the best product decision, since the other case (you CC a user who shouldn't be able to see something, not realizing they aren't allowed to see it) seems plausible to me too.

Particularly, a case where this definitely should not work, in a slightly indirect way, is Conpherence -- mentioning users should not let them see threads.

This hasn't come up before, so I'd like to see other installs hit it and weigh in on their use cases.

I like this idea. When a CC is shown as disabled one could click on it to add View rights to it.

Facebook I think really nails this idea when a user is mentioned but does not have access. The name is greyed out and a circle-minus icon appears. You get a tooltip explaining the issue.

Since Maniphest falls closer to a task manager than to Facebook, I still claim that it is worth granting permissions to users explicitly CCed in the CC field, ignoring those that are simply mentioned in descriptions and comments -- if possible at all.

I think CC should probably imply visibility in all cases. The only real reason CC does not imply visibility is that it has a bit of a complexity and performance cost, so it was easier not to implement it in the first version of things.

If CC does not imply visibility, rendering CC'd users who can not see the object as grey makes sense to me. But I think having CC create a policy exception is a clearer, cleaner, and more useful approach.

In the case of mentions, perhaps we should generalize the rule that's implicitly in Conpherence already (where mentions do not CC):

This would let mentions retain their usefulness in the common case, but make sure things are explicit in the case where policies are implicitly being changed.

Support Impact The current behavior is unexpected and confusing.

I'm going to disagree here with the utmost respect.

Allowing CC to be a side door to the 'view' security policy is really implicit, confusing and problematic. Just in a general sense, it is a positive that the security settings for issues are decoupled from the actual metadata. If a CC user is granted view to a ticket, then any user who can view a ticket can essentially render the entire Security view policy impotent and in an entirely implicit way that does not show up if I go to look at the actual view security policy on the issue. That is a really serious problem from the perspective of a security or a legal team. I do not see a "users can add CC users" permission here https://phabricator.wikimedia.org/applications/view/PhabricatorManiphestApplication/. That seems to mean that any user is who CC'd would get access to the ticket, and those users could all CC people who are then granted implicit access. That would really make my life hard, and I think anyone's life hard who deals with groups of tasks that need their access tightly controlled.

The idea of a restrictive security policy that causes any level of user confusion, to my understanding, is optional. If you want to make all view/edit public/public you are more than welcome. That means anyone who is using the security settings to greater effect definitely wants them to be an explicit and authoritative marking of user abilities. I have worked with ACL's and security settings in many contexts and it is entirely normal for a two level process to exist. From my perspective, this is equivalent to saying that every new service on a host should automatically allow itself in the firewall. That would completely devalue the firewall, and worse cause endless confusion and scare every person who is used to working with access controls.

The idea proposed by @chad I think is the most normative and valuable one. If you CC a user on a ticket they do not have access too a greyed out user would make UI hinting sense. The really compelling part for me though is that in our situation, and the situation I have used Phabricator at previously, if you do not have the ability to modify the "security view custom policy" type settings you should not, by design, be able to add a CC user who is not already allowed via that setting.

The best approach possible is going to be to have everything security related be explicit, and the answer for those who do not want to manage their security rules to to throw them open. They will be the chmod 777 users of the Phabricator world, but if I imagine a *nix security policy world where there are two parallel security policies applied to objects where one is public and easily auditable, and the other is implicit and built from a list of metadata associated that has more nuanced and confusing restrictions themselves it makes me really afraid.

Please don't do this. Or at least make it optional :)

In general, a user who can view a task can already take a screenshot of it and share it with whoever they want. I think of this as very similar to that, except that there's an audit log and the grant is revocable.

Can you explain how it's different from your point of view? That is, what sort of users do you trust to view security issues, and trust not to abuse screenshots, but not trust with "CC"?

I think the case of accidentally adding CCs is good to think about and the design here should account for that (e.g., make mentions not default-cc users who can't see the object, possibly prompt when adding explicit CCs if they'll create policy exceptions), but that we should let users do it if the workflow is explicit enough.

In particular, if I can see a ticket and want to tell someone about it, and I try to add them to CC and the thing says "you can't add them to CC", I'm just going to take a screenshot or copy/paste it to them. This seems worse in every way than letting me add them to CC?

@chasemp and I talked about this some more on IRC. We still don't have exactly the same viewpoint on where we should end up, but I think we can take an approach which everyone's onboard with for as long as possible and then possibly deviate a little at the end. Broadly, I want to implement the parts of this which would lock down or restrict capabilities first. Once we've implemented the heaviest set of restrictions, we can evaluate what holes we want to punch through them based on user feedback.

Specifically, these changes would be part of the lockdown phase. These are unambiguously desirable:

We can start with these, but they may be too severe:

Based on feedback, we can then relax these rules if necessary, e.g.:

I suspect we'll relax them about one step (which would require CC to punch a hole through policies), but may not need to relax them if no one actually cares about these use cases.

Generally, the bad part of this right now is that it's not clear that CC's don't punch a hole through policies. The lockdown phase will make that relationship clear, and let us collect feedback about whether that's good enough or there's a real need for CCs to provide a more convenient mechanism for policy exceptions.

As usual, reasonable and clear. Thanks man.

Isn't this one resolved now, thanks to object policies?

A lot of the practical cases here are resolved, but the root problem still exists. Basically, the core issue is that an object can say:

...but some or all of those users may not actually be able to see the object, or receive any updates about it, so they're subscribers in name only. I think that's confusing and not desirable (for example, you might expect @htaft to see comments you post, but he may be unable to).

In my personal opinion adding a CC that cannot see the task is an error and like this should be treated, meaning ux should just report as error when try to save it. It is important that ux reports it since it can be overlooked by the person changing the task.

If the user want to do it then should edit before or together also the object visibility adding the persons involved.

Then the task should be renamed in something like: "Adding a CC that cannot see the object should give an error"

We would also like this behaviour, and currently use a workaround to accomplish it (which is why we never came here looking for a fix). We created a custom Create Task form that sets the default view policy to include subscribers.

I imagine most people use a similar workaround currently.

If you reply to email from an object and add a new user as a recipient in the "To" or "Cc" headers, we treat that as adding them as a subscriber.

Until D20593, we would do this even if the email address was not verified. Historically, see T12237 for changing attitudes toward verified addresses, although this behavior was probably always a mistake.

In T13317, a user added noreply@admin.phacility.com to their Phacility account and became subscribed to several support issues as a result. Under the current ruleset this is harmless from a policy perspective (it did not grant them access to the issues) but this case should be considered carefully if behavior here changes.

I'm going to close this in favor of T13602, which has a more cohesive/modern discussion of the issue. Broadly: 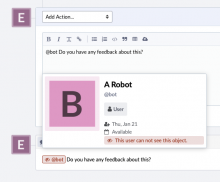