Some teams organize their work around sprints, selecting a group of tasks to be completed within a time frame. These times usually want to follow the progress done at any point of time. Burn down charts offer a visualization of this progress.

Let's imagine a Phabricator Burndown project with hundreds of open tasks and a team that organizes bi-weekly sprints. At the beginning of the sprint, the team members follow these steps:

This will generate a graph with an ideal work remaining line and columns for each day within the sprint. The planned velocity of the sprint could be shown as well.

The same page could include the list of tasks included in the sprint and their current status.

Team members work on their tasks, closing the as they are completed. At the end of the day, the graph is updated with new information:

At the end of the sprint

In addition to the data described above, at the end of the sprint we will have some useful numbers:

These numbers are meant to help teams planning future sprints accordingly. If Phabricator would support subprojects, then it would be useful to provide an overview comparing the results of every sprint, but we are not there yet.

This task was originally reported at http://fab.wmflabs.org/T244 (site replaced, data is now here: https://phabricator.wikimedia.org/T153). @Swidmann is a PHP developer active in the MediaWiki / Wikimedia community, and he is willing to work on this after syncing plans here.

@calfzhou see D12526, and then https://gerrit.wikimedia.org/r/#/c/207415/3/src/view/reports/SprintReportOpenTasksView.php as an example to how to fix it.

@dpaola2: Your issue should have been fixed just recently.

Anyone still actively working on getting this merged into master?

This looks great and I want to use it!

I have installed it and can see Sprint Start Date and Sprint End Date in my project details.

I am getting Call to undefined method ManiphestTaskQuery::needProjectPHIDs() when I try to view a task.

I've raised this at https://github.com/bluehawk/phabricator-sprint/issues/13

Is anyone else getting this issue?

The upstream will not help you resolve issues with third-party extensions (see T5447). You need to report these issues to the extension maintainer, not here in the upstream.

@dancunningham @readevalprint Also (and as a reference for anyone else
landing on this page), the actual upstream is at
https://github.com/wikimedia/phabricator-extensions-Sprint - which does
work with current Phabricator. But please do take issues up with them.

I am also facing same problem but there is no errors shown in my installation.

I had seen this https://gerrit.wikimedia.org/r/#/c/207415/3/src/view/reports/SprintReportOpenTasksView.php can see its already implemented in my code. Looks like my code is having this patch since day 1.

Anyone having information about main problem/ root cause of all this?

See T5051#137287. This ticket is not a general support place for questions about other existing 3rd party extensions.

This task has morphed a bit, so clarifying the current intent. If you're interested in Sprint/Milestone support, which is actively being built, please follow T9378, T3670.

This task will be re-scoped to just being about burn down charts for milestones.

...
This task will be re-scoped to just being about burn down charts for milestones.

Since the number of subscribers and tokens, and number of stars of the mediawiki extension on github, seems this graph will be of very much interest for a lot of people if incorporated in the core.

And I fully agree with qgil:

...
Personally I find "This project is 3 days behind schedule." more interesting. "70% complete" can be good news or bad news, depending of the point of time.

In the graph you can estimate schedule more than actual implementation that show points completed over total.

Here are some additional use cases and a sample implementation that is a Burn-up chart, not a Burndown chart, plus rationale. 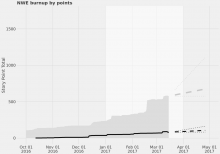