Assigned To
None
Authored By
Tags
Subscribers
View All 15 Subscribers

It would be nice to link T123 and such in commit message summaries in history views in Diffusion. I believe this is blocked by having better support for summary/header/feed markup (e.g., no image macros or other giant stuff, just links and basic styles).

Duplicates Merged Here
T12868: Highlight and link URI's in review titles
T9344: When chat entry is image macro, show only the information of the message in the image, not the macro itself
T9398: External links in blurb not parsed when previewing (hovering) over the usernames
T4027: Link commit header also to bugtraq url
T12640: Project descriptions remarkup is not parsed in query object selection
T11765: Task in Conpherence topic not auto-linked.

I think it's probably correct for task titles, Phriction document titles, etc., to not be Remarkup.

If we wanted to support the Phriction icon use case (which I don't think is necessarily unreasonable as a general CSM-esque / user control feature) I think just building it into Phriction properly makes the most sense, so you'd pick an icon for each document.

Particularly, these titles things are frequently linked, so we can't let you put links into them without everything turning into a huge mess. This doesn't seem useful to me anyway. And we can't link other objects either, and embedding them likely doesn't make any sense. Most other rules won't work, either. So I think that would just leave us with bold, italics, and icons?

It doesn't seem valuable to me to support these styles in object titles. It would add a lot of complexity (e.g., APIs need to deal with it, search engine stuff needs to deal with it, mail needs to deal with it, summarizing becomes more difficult, rendering list views gets way slower / more complex). None of this is impossible, but the value of putting bold text in your task title seems near-zero to me. (On the icon front, you can technically already use emoji, just not the shorthand aliases for them.)

The original Diffusion use case was dealing with a more narrow situation: some users write commit messages like this:

That is, their entire commit message is just a reference to a bug/task/ticket, and they have no summary or context.

That is, they write real commit messages but always put the name of the relevant task in the summary.

In Diffusion, in the history and browse interfaces, we render this text as an unlinked description with no special handling: 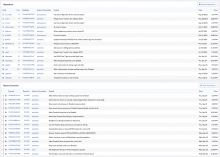 For users looking at this interface who also write very brief commit messages or always put task links in summaries, this could clearly be improved by replacing "Fixes JIRA-123" with "Fixes JIRA-123".

But I think this situation is unique to Diffusion, and we never render any other object titles unlinked as far as I know (except on the detail pages themselves).

I think Hovercards and Conpherence summaries are clearer cases for a summary-mode, although this mode might be different from the Diffusion mode. It's probably OK to have a codeblock or blockquote in a hovercard, but it doesn't make sense in a Diffusion view.

I frequently use backticks in task/revision titles and would like for those to be rendered as monoscoped text, but this is a relatively small use case.