I'm unable to clone a Mercurial repository hosted by my Phabricator instance that I initially pushed using the HTTP interface. I suspect this is some bizarre configuration error on my end and not a major problem with Phabricator, but i'm at a loss of how to approach this seeing as the only error I get is:

None of the Phabricator daemons report any errors, which is highly annoying. I do have other repositories which work fine, it's just this one repository which i'm having problems with so I suspect this will be rather difficult to reproduce. Any ideas?

Yeah, the daemons don't handle HTTP requests so they aren't expected to report errors. You should check your webserver error logs instead (usually /var/log/httpd/error.log or similar for Apache), or php-fpm logs if you're using nginx + php-fpm.

CHeck the Apache log, and i'm guessing this must have something to do with it...

I think there's another task somewhere, but two issues here are:

Yeah, we hit the 2GB PHP string size limit recently (String size overflow in [...]/ExecFuture.php on line 712).
A solution to this problem would be nice.

For now, the best workaround is to use SSH instead of HTTP.

Are there any plans to support HTTP clone mode for large projects?

We plan to resolve this eventually but it's not a priority. SSH does not have these scalability limits and is the recommended workaround for large repositories.

T7789 has some discussion, but there's now a clear pathway forward here which doesn't require anything too drastic. Specifically:

Build $_POST only on demand: This means that $_POSTwon't be populated, but that's generally fine: we rebuild it ourselves in AphrontDefaultApplicationConfiguration->buildRequest() so we can fix problem behaviors in the native parsing. However, this needs to be moved to read $_POST data only once it is requested -- instead of automatically at the time of request construction -- because we don't want to read the whole stream if we're processing a VCS HTTP request. This may be a bit thorny/involved and require some cleanup of the initialization sequence, but shouldn't be technically difficult.

Stream Requests: We need to add a bit of glue to let AphrontRequestStream stream into ExecFuture. Each already supports streaming, they just don't expose compatible endpoints.

Stream Responses: We need to add a bit of glue to let ExecFuture stream a response. Again, both already support streaming, they just don't expose compatible endpoints. Only this step is required to relieve the clone limits, the other steps relieve push limits.

GHC appears to be running into this limitation. We would prefer to use anonymous HTTP access with our build bots; is there any hope that this will be fixed in the near-term?

Probably not. Because it's a scalability issue this does get some amount of internal priority, but we have a large amount of external prioritized work in queue ahead of it (see Prioritized).

A wrench in the gears here is that disabling enable_post_data_reading also disables $_FILES, which we use in about 20 places with vanilla HTTP <input type="file" /> controls. So on top of initialization order issues with $_POST, we also need to build a multipart/form-data parser that can populate a synthetic $_FILES or some similar construct.

When enabled, the SERVER, REQUEST, and ENV variables are created when they're first used (Just In Time) instead of when the script starts.

Then you just have to make sure you figure out you're in a request where you shouldn't use the $_POST superglobal before you actually try to use it. For any case where it's okay to read it, just carry on normally. You'd be able to incrementally fix different subsystems: the unfixed ones would continue to use the superglobals and have scalability issues, but the fixed ones would be fixed and usable right away. You wouldn't have to eliminate all $_POST use from Phabricator, just any pre-routing use. Right?

Though, does XHProf read __profile__ every time before the rest of the request lifecycle, even in production? Cause that would kill this plan.

From the documentation, it looks like doesn't apply to $_POST (only $_SERVER, $_REQUEST, and $_ENV), so it doesn't seem likely to be useful. Are you aware of different ($_POST-affecting) behavior in practice?

Our access to superglobals in PhabricatorStartup comes from D6672, and works around an issue where PHP's (fairly insane) sanitization filters are configured.

I suspect we can just remove $_POST there, since we'll be reading and parsing it ourselves now. If PHP is sufficiently crazy to sanitize the raw php://input stream (which I doubt, but you never know), we can just refuse to run with sanitization configured.

This potentially dovetails somewhat with T12907, where we need a stream parser for HTTP responses, although since we're parsing partial requests (vs full responses) here and may need to do some of the parsing very early I'm not sure if it actually makes sense to try to overlap things.

The __profile__ stuff is not important, and, in an extreme case, we could pass it via path (/!options=xprofile/T123 or similar) if strictly necessary.

I don't see any easy way to cheat through $_FILES, though. We could remove it, but we have a nonzero number of users who compile their own copy of Linux and use a window manager that doesn't support drag and drop and disable Javascript and don't believe a monitor should ever have more than 256 colors, so that would leave them out to dry. The conversion also isn't trivial, so even if we want to move in this direction eventually I think it's a significant scope expansion over just building a synthetic $_FILES.

I don't see any easy way to cheat through $_FILES, though. We could remove it, but we have a nonzero number of users who compile their own copy of Linux and use a window manager that doesn't support drag and drop and disable Javascript and don't believe a monitor should ever have more than 256 colors, so that would leave them out to dry. The conversion also isn't trivial, so even if we want to move in this direction eventually I think it's a significant scope expansion over just building a synthetic $_FILES. 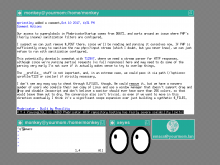