Remove the "filetree" setting (so it's always enabled for everyone)
Closed, ResolvedPublic
Actions

The "file tree" is currently rendered mostly on the server, and has a preference to enable or disable it. I think the preference was originally motivated by performance concerns.

In modern Phabricator, the performance cost of the file tree is likely no longer very significant compared to all the other things the page is doing. This preference can probably be removed. Note that the file tree can still be expensive on large changes (PHI485 has a profile where it took 3s to render on a 3,500 file change, and likely provides little or no value) and should degrade.

Right now, the file tree has a significant server-side component. This probably makes sense to move to the client.

See also PHI485, which would like to sort "files affecting packages I own" to the top. We could let you sort (and even drag) files using the file tree, although this feels highly ambitious.

Pretty much ready to ship: 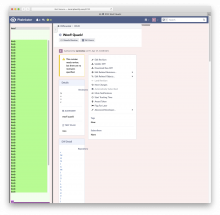