How do I remove subscribers from Macro, btw.

Just the input on the create form, not the feature wholesale, right? Let me finish up (just Ponder left) and then I'll dig it up, I'm pretty sure there's a method you can use for it but we don't do it very often.

Ponder is A Bad Product

How are you creating macros with non-viewable images?

This is a genuine shopping list used by the Priestley household to purchase goods!

Oh, isViewableInBrowser() is the wrong check, and includes things like text files. Should be isViewableImage().

I've been terribly unlucky in locating fejolollololals in any grocery store here on the East "coast".

I couldn't find them either but I understand:

I had a friend once which I think had a fejolollololal farm.

I can't reproduce "Attaching audio to a macro does not appear to work at all: always "You must upload audio.""... any ideas ? 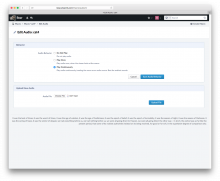 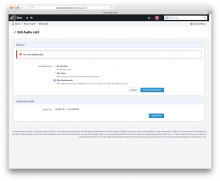 I can dig into this locally if you did the same thing without any luck.

Yeah I tried wav and mp3, safari and chrome, can't get an error here.

Oh, the error just wasn't clear to me. I thought it meant "You must upload audio." in the sense of "you did not upload anything, but needed to". It actually means "You uploaded a file, but the file isn't a valid audio file as far as Phabricator is concerned.".

I think this stuff remains:

In Fund, as a merchant I can't refund a backer in the general case because I can't view the cart. I think? Unless I forgot about something magic. I think this is pre-existing and an artifact of Phortune being conservative about permissions.

Just going to punt this for now until we have an actual need for it (e.g., iterate on Fund for some reason).

There is no UI feedback in Slowvote if you vote without selecting an option.
In Slowvote, attempting to vote in a closed poll (load form in one window, close poll in second window, submit form in first window) results in "400 Bad Request". Better would be UI guidance ("Voting has closed.").

Spaces does not publish feed stories, but reasonably could? Also mail.

Just going to punt this until someone cares, too.

Oh, the upload control ended up better but not great, but I'm not going to specifically file anything for that since I don't think we'd pursue it on its own and don't think we'll forget about it when we next do adjacent work.