Figure out what to do with "Edit Blocking Tasks", "Edit Differential Revisions" and "Edit Pholio Mocks"
Closed, ResolvedPublic
Actions

I think part of the confusion around "Edit Blocking Tasks" is because no "Edit Blocked Tasks" action is available. If users had a modal choice between the two, they'd have to think about what they were doing instead of blindly clicking the most-similar link to what they're trying to do, which I suspect may lead to sort of workflow blindness. In particular, I think giving user a modal choice is better than putting them in an "Edit Blocking" mode and requiring them to select "Blocking Tasks", then change them to "Blocked Tasks" using a dropdown (as in T4788#106456), since this is pretty confusing/unintuitive (you have to click an action which is opposite what you actually want to do).

So I'd like to try adding a second action, but this exacerbates the existing problem of all these actions being pretty similar and cluttery. I also expect we'll have more of them in the future (with third-party applications if not other first-party applications). D8685 was one attempt to fix this, but never felt quite right to me. M1464 tackles the clutter problem, but didn't try to address these relationship links.

If we had a good way to fold these, I think it's likely that we could resolve confusion about merging and confusion about blocking tasks by just giving users modal choices so they're forced to pick the one they want.

I was sort of hoping to make Pholio (for instance) a rich panel in the main column. So if I attached M1464, I would get a Pholio Panel with

I'd probably turn this into two sections (I guess?) if we had a dropdown/disclosure element:

I don't like the title "Edit Related Tasks" but that generally seems structurally reasonable to me otherwise, and less error-prone.

Yeah, I think that's totally reasonable. I want to fix up the UI for showing subtasks and revisions and stuff as part of T4788, so I'd expect to do this:

I go back and forth on if Tasks/Revisions/Commits should be richer. I do think maybe we can leave them as a list but have a button/dialog to pull up their full cards? My main concern UI wise is they'll take up a ton of space on larger tasks and really force the content down.

Let's start with the two dropdowns and see how it goes.

We could also probably hide closed tasks/revisions by default ("+13 closed revisions, click to show") and truncate commits ("+52 older commits, click to show"), although I haven't personally found that stuff to be particularly annoying.

Yeah, I'm leaning toward starting there too.

e.g., pretty sure we can do slightly better than this without resolving any big philosophical questions:

Dropdowns need a bit of CSS tweaking but they feel OK to me. 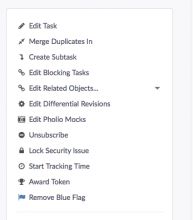 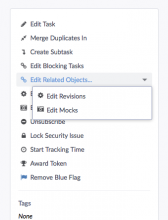 The open state feels a bit busy (menu-on-menu) but I think fixing the dropdown so it comes out full-width will help with that. Might be good to align it directly under the "Edit Related Objects..." action and use some sort of stronger style for the active state of "Edit Related Objects...", or grey out the rest of the menu or something. Feels pretty minor and tractable to me, though.

However, this creates a problem that the mobile version is already a dropdown, and the code doesn't currently work if we put dropdowns in dropdowns. I'll see if I can fix that.

The "Edit Revisions" and "Edit Mocks" actions are also pulled in by event code right now, so I need to modularize/update that.

Actually, I'm slightly wrong about dropdowns-in-dropdowns being the issue, looks like some kind of rendering order problem instead.

I sure wrote some Javascript today

I pushed that junk here, yell if anyone catches issues.

My plan forward is:

Then I'm going to figure out how to move forward on ObjectSelector, I'm not sure if I'm going to move relationships over one at a time or try to do the whole thing at once yet.

The UI stuff seems to be figured out so I'm going to call this done this continue work in T4788.