Now that we're getting close to finishing Conpherence v2, we should figure out what the ultimate fate of JX.Scrollbar is.

For context, particularly for anyone coming into this ticket from the world at large, JX.Scrollbar is the fake scrollbar which replaces the real scrollbar. The reason we started using this fake scrollbar is to support adding a durable chat column to Phabricator: 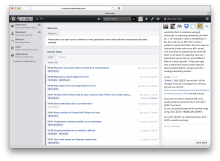 You can activate this column by pressing "\" on your keyboard.

Specifically, without the fake scrollbar:

The fake scrollbar was an attempt to fix these issues. Particularly, if we were designing this column for a desktop application, it would be a clear and obvious choice to put the page content scrollbar to the left of the chat column. The intent was to aim for that and see if it was achievable. Generally, we wanted to evaluate our options here and choose the best set of tradeoffs.

JX.Scrollbar works a lot better than I expected it would, and is essentially indistinguishable from normal scrollbars for me on Safari on OSX. However, this isn't the case for all users, and it has some behaviors which are unfixable or very difficult or complex to fix:

Also notable: we've changed the left column in Conpherence so that it usually does not need to scroll. This has reduced the importance of JX.Scrollbar somewhat.

In general, note that there are really two separate things JX.Scrollbar is doing:

Some possible ways forward, in rough order of commitment to JX.Scrollbar:

If everyone was using Safari on OSX, I'd say (1) is a good option and maybe we do (2) to let alt-meta-middle-click work properly for build-you-own-linux-window manager users who probably compiled their own scrollbars from source anyway.

However, some of the Chrome stuff particularly is fairly debilitating. T7740 is an intensely confusing, broken UX. T7494 isn't as bad, but still a pretty bad experience.

To fix the Chrome stuff, we have to go at least as far as (3). I'd prefer not to do (3) or (4) because I think they make Phabricator much harder to test and develop in the long run: they give us two separate modes with a major fundamental layout difference. In the case of (4), switching between the modes would require a lot of work (adjusting a preference setting).

These compromises feel OK to me. The "fake + normal" double scrollbar in mouse mode doesn't feel too confusing, and the visual affordance to provide a margin for the trackpad bar seems reasonable to me and doesn't jump out as ugly or clearly out of place.

To add my own personal notes on this:

I use Phabricator on Linux and Windows daily with Chrome; the only issue I've ever noticed is pages not jumping back to their position after refreshing the page (which I reported and I think got marked as Won't Fix?).

When building your own scrollbars with a Haskell assembly generator running in a PDP-11 emulator, this would obsolete the workaround in T7323, correct?

I be the weird one and say that JX.Scrollbar is the best "fake scrollbar" implementation I've ever saw and if I wasn't using build-you-own-linux-window manager I wouldn't notice that scrollbars are different at all! For me - I'd go with (1) and say "it's not a bug it's a feature. Actually it's a bug in chrome, go and complain to google. You use Firefox? Well, that's a bug in windows, go complain there" ;-)

(The new options in approaches (2) and (4) would more-or-less let you activate the workaround to varying degrees; (3) would obsolete it when the durable column was not enabled.)

Probably 5 / generally accepting that this is one of the Last Great Problems for the Internet to solve. (Once its done, world hunger is next I think.) Some thoughts -

FWIW, I haven't run into any scrolling problems (including T7740) in either of these browsers

I also have users on newer variations of the above with no complaints.

Approach (5) is now in HEAD and on this server. Let me know if anyone notices major scrolling problems that I missed.

The expectation is now:

With the durable column open, you'll get a double scrollbar. Hopefully, this isn't too visually confusing. If the double scrollbar is worse than the old stuff was, let me know.

This looks & works better than I expected. At least in my case the second scrollbar only shows up if I interact with the chat column so the context is clear. I get that this is normal for OSX and that expectations vary, but the distracting disappearing behavior was a lot of what drove me nuts. With the current build I can interact with the chat column without visually loosing my place in the page; in other words the double scrollbar actually ends up being an unexpected virtue from my point of view.

On mobile, the columns are compressed on the left hand side of the window, and the right hand column of the window is blank, just the grey background (where the durable column would be). Seems to affect all pages so far (homepage, maniphest) 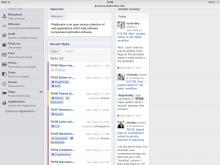 What physical device are you on? I can't immediately reproduce that on any iPhone/iPad...

Attached diff probably resolves things? I was seeing something similar on my mac using chrome with a trackpad.

The layouts on secure.phabricator.com appears to be fixed for me

I'm going to tentatively call this resolved since things have been quiet for a few days now, but I'll keep an ear open for more feedback.