Currently, Phriction pages list child pages in a "Document Hierarchy" section at the bottom of the page. This listing is hard-coded as 2-ply with a fallback to 1-ply if there are too many direct children.

The "Table of Contents" is available in a popout menu:

The page actions are in a standard curtain UI, embedded into the document:

These behaviors are okay but not great. I'd like to make these changes:

These adjacent changes are also desirable:

I'd like to at least experiment with some parts of this structure:

This structure may make less sense on mobile, but it's probably not awful. Meaningful customizations here would be:

This needs a lot more work, but here's very roughly where I'm trying to go with this: 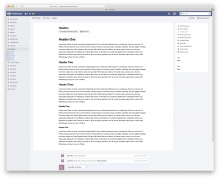 This feels pretty promising so far.

At the lowest levels:

Remarkup currently can not export a structured representation of document headers, just a blob of HTML. It should support structured export instead. We need this to be able to render page headers into the left nav. This is not very difficult.

I'd like to figure out what's going on with Remarkup headers and anchors first. We currently generate very clumsy anchors, like #termination-for-nonpayme (this is not a typo; we truncate in the middle). At a minimum, I'd like to allow generation of longer anchors and try much harder not to truncate in the middle of words. For example, #termination-for-nonpayment is a better anchor here. As a compatibility step, we could also add Javascript to try to scroll #asdf to any anchor on the page which has asdf as a prefix, so #termination would scroll to the first anchor beginning with #termination. This would keep the legacy anchors working and let savvy users tidy up weird anchors if they want without having to actually edit the document.

I'm tentatively inclined to introduce {anchor ...} and {header ...}, which would have similar behavior. Something like {anchor #name [options]} and {header [#name] [options]} <text to end of line>, possibly?

This seems generally reasonable. Headers which specify an anchor would also generate a default-named anchor, but the specified anchor would become preferred.

The {anchor} element would just generate an invisible document anchor for now. In the future, maybe it could generate a hint that the anchor exists in the left margin or something like that, or have a "name" option to make it appear in the table of contents. I think all of this stuff is relatively advanced, but at least some use cases involve auto-generating documents or compiling "presentation" documents where it makes more sense to put effort in upfront.

So my plan is: