Resource allocator does not create new host resources when one is already active
Closed, ResolvedPublic
Actions

Situation: We want to run exactly 1 build on 1 machine. In order to do this we tried to set the limit of a working copy blueprint to the same number of machines in the relevant almanac service. When the working copy tries to lease a new host, it leases all the builds to the same host rather than spreading the load across all available hosts.

Actual Behaviour: All working copies are created on the first (and only) host.

Analysis: Looking at the code this seems to be the expected behaviour.

Specifically, looking in DrydockLeaseUpdateWorker.executeAllocator, $resources is initially set to the result of loadResourcesForAllocatingLease which queries which suitable resources are available and then filters them depending on how the canAcquireLeaseOnResource method is defined for that resource type. For hosts (in DrydockAlmanacSericeHostBlueprint) the method always returns true. Thus, if there is one active host, the whole body of code which initialises a new resource is skipped.

Offhand, these don't look like current / valid versions of Phabricator. They are out of date and installed from somewhere other than our source. Please see Contributing Bug Reports for what we require in a bug report.

I will use a completely clean build tonight and reproduce this but the code hasn't changed since 2015.

OK -- I made a new ec2 instance with the phabricator marketplace image to make the install easier. Updated to the latest stable and could still reproduce this. I don't know why the commit branches are saying that it is branched because I git reset --hard origin/stable on all the branches. I repeat -- this is a 100% fresh machine with the latest stable channel fetched from the phacility repos.

Upstream doesn't support Phabricator installed via third-party images (including Bitnami). You need to reproduce the issue on either a blank Phacility test instance, or by following the Installation Guide and reproducing it there providing it's not an environment issue.

Without actually reproducing this or looking at the code, I believe this isn't a bug. You're expecting Drydock to choose particular allocation strategies:

These aren't universally the right strategies, so the behavior you want isn't unambiguously correct. Here are two scenarios where greedy allocation is worse than the strategy Drydock currently uses:

Separately, Drydock currently load balances by choosing resources randomly. There are lots of scenarios where this isn't the best strategy:

That said, I think selecting a load-balancing strategy is generally not hugely important and that "random" is usually good enough.

I believe you can work around this today by disabling the binding to host "A" in Almanac, running one job (which will be forced to allocate on host "B"), then re-enabling the binding. After that, both hosts will have resources and jobs will allocate randomly, which should be good enough. This is exceptionally cumbersome and ridiculous, of course (and it's possible that it doesn't even work).

Broadly, the context that much of Drydock exists in is that we (Phabricator) have ~15-ish second builds and they're great. I don't want to bake an assumption that everyone's builds take forever into Drydock, and Drydock development usually targets us first since we're the only install we can test. When a new feature gets written, the first version tends to have behavior which makes sense in the upstream context of fast builds and excess resources.

From an engineering viewpoint, this is the context that I think every project should exist in. In reality, of course, few do. After I publish my memoir ("From Abra to Zubat: How to Engineer Software Correctly") I am confident that my unique insights in chapters like "Slow Builds Are Not Good" and "Humans Cost A Lot More Per Hour than Computers Do" will usher in a new era in industry, so we only need to hold out until then.

So my point here is just that: I don't want to compromise on supporting fast builds; we have fast builds; we target us first; so defaults and initial versions tend to make sense for projects with fast builds. Since fast builds aren't common, these initial behaviors won't be right for everyone and may not even be the right defaults. I'm cognizant that we need first-class support for slow builds too, the hard-coded "fast build" option just tends to get built before the "fast build or slow build" toggle -- here, support for selecting and configuring different allocation strategies.

See also T7006: Harbormaster targets execute multiple times if they run for longer than 24 hours for builds in industry. That actual build didn't truly run for 24 hours, but I think there's a healthy dose of self-made problems in some of the build use cases we've seen. We'll support most of these and become more robust against other failure cases like bad builds outputting 100GB of data which you have a regulatory obligation to retain, but they aren't what we're targeting in the first cut.

A short comment now. Thank you for the very detailed reply.

The reason I filed this as a bug is that it seems that there is no situation where the second host will ever be allocated. Is there some scenario which can trigger both bindings in a host group to be brought online? I am trying to understand the intention behind having host groups if this is never the case.

Is there some scenario which can trigger both bindings in a host group to be brought online?

Not currently, unless I'm misremembering.

Because such scenarios will exist in the future, and we didn't need to create these scenarios yet to do useful work with Drydock.

Although it's clear that you should be able to configure allocation to work differently than it does, it's not yet clear what the UI (or even, really, what the underlying model) should look like. I think the most up-to-date discussion is in here: D16565#195217 (second block).

I believe you can work around this today by disabling the binding to host "A" in Almanac, running one job (which will be forced to allocate on host "B"), then re-enabling the binding. After that, both hosts will have resources and jobs will allocate randomly, which should be good enough. This is exceptionally cumbersome and ridiculous, of course (and it's possible that it doesn't even work).

Beyond being exceptionally cumbersome, this doesn't work. A more-extreme version (where you actually mutilate the binding or just edit the database) can be forced to work, but I'll just fix this since the behavior is desirable regardless even if this particular application of it is absurd.

After that, both hosts will have resources and jobs will allocate randomly, which should be good enough.

This part does work. Once two hosts come up, we shuffle() new leases onto them randomly: 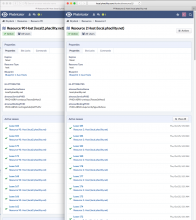 D19762 adds a "supplemental allocation" behavior, which basically lets blueprints say "I want to grow the pool instead of allowing this otherwise valid lease acquisition".

It also makes the Almanac Service blueprint always opt to perform a supplemental allocation, so acquisitions will always be replaced by allocations as long as allocations are possible. The technical details of this are a little obtuse, but, basically, the first few concurrent leases will always go to different hosts until you run out of hosts. After that, leases are allocated randomly.

I'm having some trouble getting this new behaviour (which IIUC basically means that multiple hosts in a Drydock pool should be load-balanced across). In "active resources" I see three Drydock hosts, which all belong to the same Almanac service. In "active leases", however, I see only a single host lease and many working copy leases.

I'm having some trouble getting this new behaviour (which IIUC basically means that multiple hosts in a Drydock pool should be load-balanced across). In "active resources" I see three Drydock hosts, which all belong to the same Almanac service. In "active leases", however, I see only a single host lease and many working copy leases.

Nevermind, it seems to be load balancing now.