Build a 2-up preview mode into the fullscreen Remarkup editor
Open, WishlistPublic
Actions

We have many places where people may want to write and preview Remarkup in a clean, simple interface. We have the additional restraint that these places may be themselves space constrained, like Conpherence, Durable Column, Pholio Comments, Differential Inline comments. I'd like to design out a more complete Fullscreen editor that has a full preview column that updates as you type (50/50 left/right). 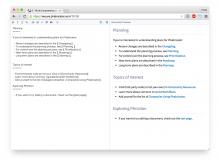 Had same complains and I think this feature will be reasonably useful.
Hopefully will be implemented any time soon.

This is my number one feature request for Phabricator. A long Wiki page is really hard to edit with the preview at the bottom of the screen. I've often used the Chrome inspector to 'munge' the CSS so I can see the preview on the right, which helps a little.

same here, this option would be quite useful.
Two independent scrollable views. one to write and one for preview.
This can be placed side by side in the white space when you comment task, create it or in Phriction pages.

Can i bump and add a thing ?

also how i can help ?

My attempt(s) yesterday focused around trying to stick the existing preview in the pertinent area via CSS.

My next attempt will instead create a new preview area in the DOM and have the preview behavior set the pertinent HTML for the existing preview and the preview I am building (2x). This struck me as dirty before, but after more than a few hours wrestling CSS I'm pretty sure this will be cleaner and less buggy.

Implementation wrinkle is differential, maniphest, conpherence (and possibly more) need implementation detail slightly different than the generic transaction technology. Nothing too major here but its not going to be as uber clean as one might like.

If the design is missing anything, let me know, though I think this is straightforward interaction-wise.

The only piece there is the "Document Preview" label is either going to be just "Preview" or something per object type, like "Comment Preview" or "Message Preview", etc. I figure that's NBD but I do plan to deviate there.

After thinking about this for a bit, I sort of question whether this is actually a very good solution. I think there are three root problems:

This doesn't directly affect mobile and presumably isn't a usable view on mobile, so I think it doesn't solve (1). I think the fix there almost certainly needs to be a click-to-preview workflow, like the one described in T8088.

This is probably the right general way forward for T7271, but I think doesn't completely fix it. It will improve it a lot if the document is about a page long. If the document is more than a page long, I worry you'll need to independently scroll the preview and text input a lot to line them up. Making the preview scroll correctly automatically seems very hard (although maybe I'm overestimating the difficulty of getting this to feel "good enough"). I worry this approach may feel pretty bad for 3+ page documents without a lot more work to get the scrolling to line up. If we did that work, it seems like it would be better in all cases for editing large documents like Phriction pages and Legalpad, and that we'd be better off replacing the main editing UI with a 2-up UI rather than burying this UI so deeply.

This sort of works around (3), but it's fairly heavyweight, buried, and won't work on mobile.

If the fix to (1) is click-to-preview, building that (like T8088) and just defaulting to it in Conpherence seems cleaner than pursuing this?

Pursuing a 2-up view generally seems very hard to get right in the 3+ page document case.

I think you're right on 1), that we may need to pursue a click to preview for alternative cases like mobile. In regards to a 2-up view only being useful in Phriction/Legalpad, I'd probably disagree. Mostly, I don't know when or where I might want to spend an hour typing something out (comment, new task, Pholio, etc) so having something available everywhere would be my preference. In the basic sense, even if I have to manually scroll each window, it's still seems like improvement over the current situation. Or at least, I'd like to feel it out before deciding it was really bad.

Thought maybe this is also a lot more work that I thought to even test out, up to @btrahan.

I do think we can get the scrolling to work well, even if it feels pretty bad with the naive approach, but would have to do something like this:

Taking a step back here...

Is that an automatic error correction?

No, I fixed it manually.

Building something generalish here may be the best way to unblock D14802, and to reduce the amount of regression behavior from T9905 (I am missing the preview a little myself). I think we need click-to-preview in some cases (mobile, Conpherence) anyway, so my tentative plan is: