I started up a phacility test instance to test something ... the import seems to be taking an abnormally long amount of time

The repository in question has 19K commits, but has been importing for more than 10 hours and is ~10% complete, for an effective import rate of 3 commits / minute. This is unreasonably slow.

There's also a bunch of the usual free-tier shenanigans on this host -- free instances with 1 user importing multiple large repositories -- but that's to be expected.

@epriestley The import has finished, but some commits show as importing still?

My impression is that there is a lot of room for optimization in the RepositoryPullLocalDaemon. I've wanted to tackle that for a while because it causes a fair delay between when a commit goes into git and when it actually shows up in Diffusion.

I can't remember off the top of my head but I'm pretty sure that there are some low hanging fruit in there.

This repository uses pull requests, so it has about 3,200 refs and takes about 1.5s to list:

We also run git for-each-ref three times, at a cost of approximately 400ms each.

Internally, we use a commit cache to track repository heads. The size of this cache is 2048. This repository has 3,200 refs, so they fall out of the cache. The cache purges like a ring buffer (FIFO) so every ref triggers a cache miss.

The size of each cache entry is approximately 40 bytes (this is 40 "PHP Bytes", so probably a lot more than 40 real bytes, but likely less than 10x more), so we can freely use a much larger cache size.

During import, we poll repositories at the maximum rate (once every 15 seconds). This repository is also active enough to get maximum polling after import. Each update takes approximately 4s.

Here are some things we could do to improve this:

Of these, I believe only the cache changes are straightforward, and they are not an overwhelming fraction of the runtime.

@epriestley The import has finished, but some commits show as importing still?

I can't reproduce this, perhaps it resolved itself?

Shows as importing in the ui

Ah, okay. This is the relevant part:

This commit has been deleted in the repository: it is no longer reachable from any branch, tag, or ref.

We stop importing commits if we detect that they have become unreachable, which may strand commits in a partially imported state. The UI could be more clear about this.

The commit cache should be a fairly large performance win.

It is expected that some deleted commits will import and others will not.

If a commit imports before it is deleted, it will import. For example: push a branch, wait for the commits on it to import, delete the branch.

If a commit does not import before it is deleted, the import will abort. For example: push a branch, don't wait for the commits on it to import, delete the branch.

Can you explain in more detail why you think the code isn't working correctly? For example, what is the hash of a commit which you believe to be reachable but which you think is incorrectly marked as unreachable, or vice versa?

The reason I think something isn't working correctly is in my dashboard, I list recent commits, and since I updated my install a few weeks ago my commit list looks like this a lot: 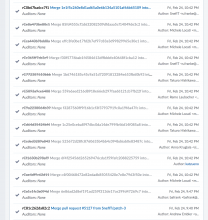 Previously, I never saw these deleted commits show up, and they tend to be pretty useless/duplicates

If you don't want to see unreachable commits, use a query which hides them:

That works, Im curious when this changed, as I didn't need to filter since the last few weeks.

(That said, my expectation is that behaviors around unreachable commits have not changed -- D17279 added the "Unreachable" option to solve this problem.)

Cool, now I don't feel so bad since I know you only recently added the option 😄

While the git ls-remote change isn't really motivated as a performance improvement, it does seem to have reduced CPU usage a measurable amount (deployed on the morning of 3/18), maybe 15%:

There's no appreciable change in disk I/O or network I/O that I can see from the graphs.

While the git ls-remote change isn't really motivated as a performance improvement, it does seem to have reduced CPU usage a measurable amount (deployed on the morning of 3/18), maybe 15%:

I am seeing a similar drop in CPU use on wikimedia's phabricator host, it looks closer to 10% but still significant.