Depends on D20440. Ref T13279. Create a class to represent a chartable function: something we can get some data points out of.

For now, the only supported function is "fact(key)", which pulls data from the Facts ETL pipeline, identified by "key", and takes no other arguments.

The UI may not expose this level of power for a while (or maybe ever) but until we get close enough to the UI that these features are a ton of extra work I'm going to try to keep things fairly flexible/modular.

Yeah -- for now, I am mostly just cheating because even our most frequent datasets generally only have a couple million total points, and if you want to use our AMAZING charting tools for "total clock cycles executed on all 100K machines" or something you can easily sample the data yourself before pushing it in (and there's no push-it-in API yet anyway), and this isn't a major use case anyway since there are already 200 other tools that count clock cycles.

There's a lot of performance layers we can add later as necessary, notably:

But the biggest defense here is only having teeny tiny little small data.

You could probably cache the actual SVG element itself, right? I bet in most cases that would be smaller than the dataset itself.

just dump JSON out of the cache for like 10 minutes

As an ops person, that all sounds good as long you provide some way to force fetch the most-recent data point(s). If the fact is like "attempted logins per second" and I'm trying to blacklist the right stuff that's slamming us, it is miserable to sit there hitting refresh, waiting for what you know is a cache timer to expire.

Maybe the algorithm is:

I think the "meaty" part of that is O(R log N) where R is the number of points we remove and N is the total number of points, and is dominated by O(N log N) in step 2, where we sort the list, so we end up somewhere reasonable.

Rather than removing the "most tightly packed point", we might actually want to remove the point which has the shortest distance to the line between the two adjacent points.

As an even more advanced technique, we may want to remove the point which causes the smallest change in the area under the line when it is removed. This considers both "packing" and "unusualness". 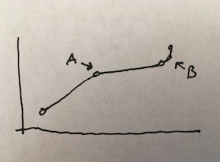 ...we might prefer to remove point "B" over point "A", even though "B" maybe have a longer distance the line between the adjacent points, because removing "B" changes the visual shape of the graph by a smaller amount.

(The point between "A" and "B" might really be the best point to remove in this particular drawing.)

But removing the point which causes the smallest area change would require that I know how to compute the area inside a triangle given its vertices, which I don't, so maybe we can hold these features until the charts can serve at least one actual use case.