Assigned To
Authored By
Tags
Referenced Files
None
Subscribers

When replying in a differential revision or maniphest task, it might be nice to have a quote button next to each update to automatically copy & quote the text of that update into the comment box. This is fairly widely implemented on redmine & Atlassian products, as well as Bugzilla.

I think this is desirable, but we should probably include enough metadata in the quote syntax to refer to the original post.

I'll grab and mock out soon~ish

This could also be a link or something -- it's probably mostly blocked on the technical side since I'm hesitant to put some easy-but-ugly piece of syntax in the body, like:

It would probably be better if the syntax looked more like:

...but this is slightly harder to implement if the rendering needs to know anything about the original comment, because comments are currently rendered independently. We can sort of fake this and just trust the text, but then users could do silly stuff like:

That's probably fine, but it would be vaguely nice if this syntax required that the source comment and author attribution actually exist, at a minimum. Without lookups like this, we also can't do stuff like showing replies in the UI (e.g., "6 people replied to this").

None of this is intractable, but all of it tends to tread new ground on the infrastructure side of things.

@chad being "dum and hating doges" isn't so bad, it is easily falsifiable.

If y'all are going the direction of having "6 people replied to this", then you might as well just have threaded comments too.

Or at least a comment view that captured threading.

We would be totally happy if it's just plain text ;-) Thanks <3

i am dum lol and i hate doges

but doges are nice :(

I'm going to close this and subtask you to maybe look at the CSS eventually since I think the styles of the "In X, Y wrote..." could probably use a bit of refinement, but it seems to work OK now.

I am glad to see you are enjoying this new feature!!!! 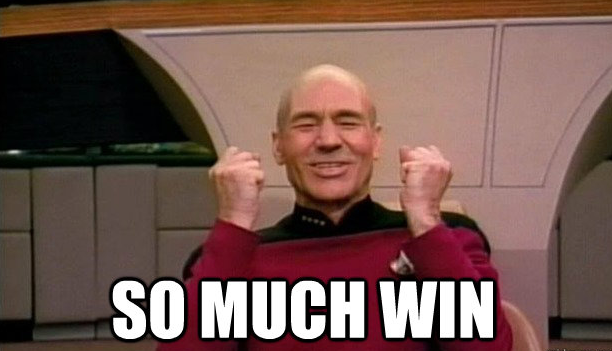 How long do you think it will be before we get a feature request to automatically fold/collapse quoted text?

How long do you think it will be before we get a feature request to automatically fold/collapse quoted text?