Arc is using pirate-speak and throwing an error due to unrecognized heading
Closed, DuplicatePublic
Actions

I turned on the Pirate language in our phabricator installation, and I noticed that pretty recently when I make a Diff using arc diff that I get a "Spies:" header in the message template where others in my organization are getting "Subscribers:". 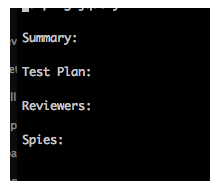 This is fine, except for when I try to submit the diff:

Arc version on my server:

I don't think this is about "magic words" - those are things like Fixes T123. This is about "regular" l18n: Differential is producing a form it can't read.

That's correct, there are no magic words in my diff message. The template I'm given when I create a new diff contains text (I assume because of the Pirate language setting I've chosen) that causes Arcanist/Differential to choke when the message is committed, as "Spies" isn't a valid heading in the Diff message.

We tend to combine similar issues into one so they are resolved at the same time by the same diff. The correct solution I believe here is the same as "magic words". That we need to maintain a list of words that are localized that trigger actions. "Spies" should get picked up and parsed as "Subscribers", just like "Fixin'" should be picked up and parse as "Fixes".

Right; I forgot they were both Fields now...

This is sort of very vaguely related to T5586, although I don't know if the fix will end up being the same or not.

The fields we read are not translated:

One of the reasons this isn't translated is the same as the reason magic words in T5586 aren't translated: the number of values may differ between languages. For example, a language with several plural forms may want to provide a list like this instead:

If we just put pht() on those strings, languages would be forced to provide exactly as many translations as English does.

The field label we write is translated:

Some other general problems:

It might be reasonable to un-pht() the field names in the short term until this gets solved for real, although it would be nice to see a use case with a legitimate translation rather than Pirate.