Fixes T5378. Allow object references to optionally include the full URI. This means that http://phabricator.example.com/T123 is rendered equivalently to T123.

Ideally, it would be nice to run this rule before the URI rule so we don't have to do the URI exception stuff. Particularly, if you type http://install.com/path/to/something/ (that is, an install URI but not a monogram), this approach as written will leave it unlinked.

You can run this rule first by adjusting getPriority() to a number smaller than the hyperlink priority. This may have the undesirable side effect of causing us to start matching monograms in URIs (or in other weird contexts, maybe), but perhaps that isn't too big of an issue and we can avoid it by being more careful with the regexps.

If that isn't fruitful, my next best idea is to let rules reach into the matched hyperlink list and update the tokens. We don't have any rules like this right now, but theoretically it should be possible to do something like:

http://phabricator.local/T1.html is going to be difficult to get right because it could be used as follows:

I think it's correct/reasonable that http://blah/T1.blah doesn't work -- it wouldn't work as a normal URI either.

Hmm, I seem to have broken {D1} somehow.

Ah, this also causes a unit test to fail (I noticed this whilst submitting D12694):

What are your thoughts on this?I think that this approach is worthwhile and that we can probably fix the remaining edge cases.

Yeah, this looks like it's going to work well to me.

This won't generate mentions retroactively, only for new comments.

One thing that might make this easier is a way to easily resolve URI to monogram. Maybe we could achieve this by adding a monogram.query Conduit method (somewhat similar to the phid.lookup and phid.query methods that we have currently.

What problem are you running into which would be solved by a URI -> monogram mapping? It looked like this is basically in a working state? Or is there more stuff that came up which turns out to be harder?

Additionally, have a convenient way to map URLs to objects would allow us to do the following:

Yeah, I think those cases aren't very important, and could probably be handled by adding a few special rules later on.

@epriestley, this definitely needs some more work in its current form... but what do you think about my revised approach? 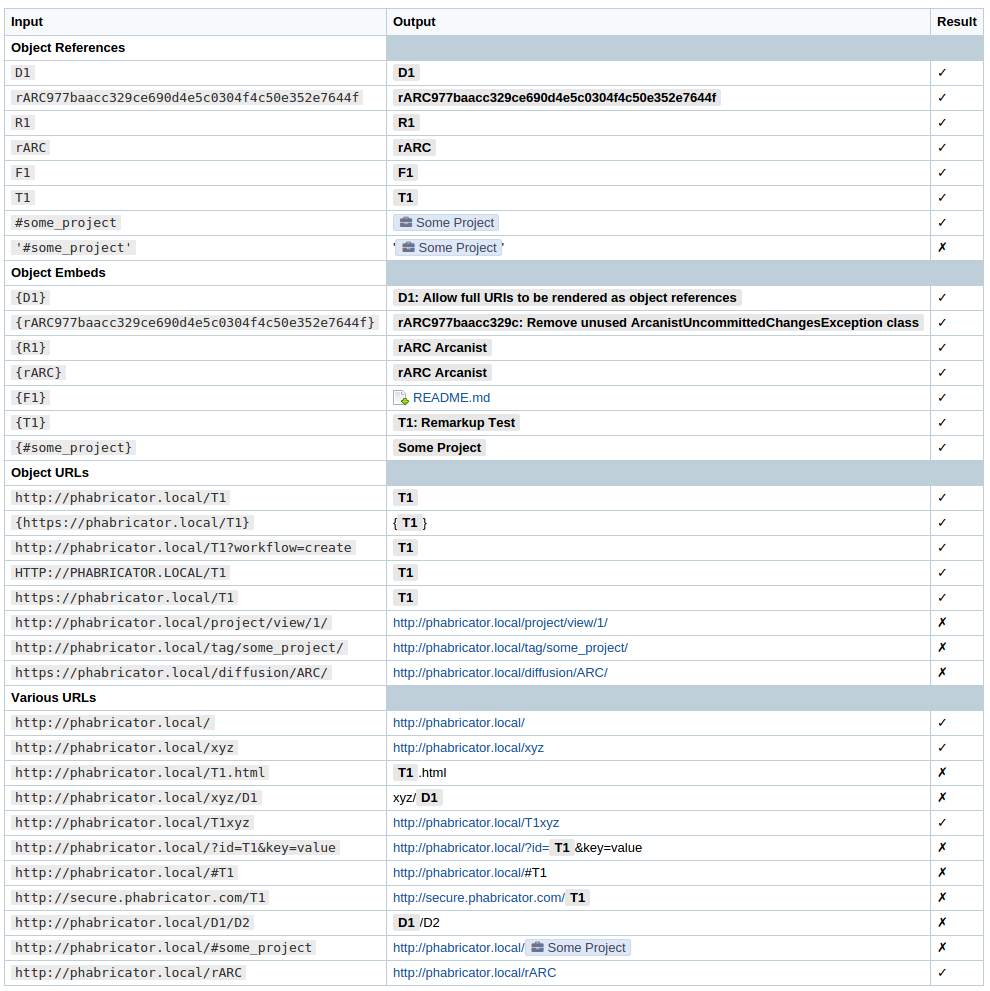 Oh, sorry: I think this is totally reasonable and we should definitely move forward with it. The only thing I'd like to adjust before landing it is supporting all URIs in phabricator.allowed-uris, rather than only phabricator.base-uri.

(I think it's also possible to run remarkup without having base-uri set, so we might need to test it for null.)

Sure, but I personally still prefer my latest approach on this. One big reason is that it handles http://phabricator.local/T1?workflow=create (I don't think my previous attempt would handle this case).

Oh derp. I forgot to actually update the diff.

Roughly, the idea here is that if something looks like a URL, then take the path of the URL and try to process it as an object reference. If it doesn't match an object reference pattern, then render it as a URL (by proxying to the PhutilRemarkupHyperlinkRule rule).

I'm not sure exactly what's going wrong with the proxying, but it won't work in the general case because the Engine never learns about the rule (you tell the rule about the engine, but not the engine about the rule). Later in execution, the Engine iterates over all the rules it is running and calls methods on them (like didMarkupText()). Although I don't immediately see exactly what's going wrong (e.g., Hyperlinks do not depend on having didMarkupText() run, I don't think) there are a class of cases like this where something does happen in those methods, and where proxying won't work.

Maybe it's easier to markup object embeds first, then do references and URIs in a single pass? Basically run the rule:

...instead of running the rules separately. Then figure out which one you matched in the callback. If it's a URI, do what you do now and return $matches[0] if you fail. If it's a reference, it skips all the URI stuff and just goes down the normal path. That should make sure text which matched the URI pattern doesn't have a chance to get examined by the ref pattern.

@joshuaspence I'm wondering if you had any plans to do work on this since a number of our users are using full URLs :/

Let me see if I can get this over the edge of the precipice...

Let me see if I can get this over the edge of the precipice...

I think I have a "working" change for this:

...but I'm not really satisfied with the approach. Particularly, it won't generalize to objects where the URI pattern and the monogram pattern differ. It would be nice for any approach here to have the potential to annotate any URI, even if it's something like /diffusion/browse/path/to/file.txt.

I'm currently thinking this needs to be three separate passes (the two existing passes, plus one new pass), with the first pass decoupling URI annotation from monogram matching: