When a page throws an exception and response construction throws another exception, throw an aggregate exception

Summary:
Depends on D20719. Currently, if a page throws an exception (like a policy exception) and rendering that exception into a response (like a policy dialog) throws another exception (for example, while constructing breadcrumbs), we only show the orginal exception.

This is usually the more useful exception, but sometimes we actually care about the other exception.

Instead of guessing which one is more likely to be useful, throw them both as an "AggregateException" and let the high-level handler flatten it for display. 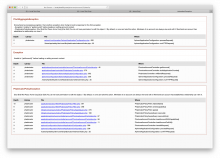