We have a development team that spans multiple timezones. I recently created a countdown for an event occurring in a timezone other than mine. Due to my lack of attention to timezones, the countdown was off by an entire day, which sucked.

It would have been fantastic if I could have specified the date and time for the countdown in terms of the timezone in which the event was actually going to occur, rather than in my own.

What is the problem you are specifically trying to solve with using Countdown vs. Calendar? We have plans to greatly improve Calendar, but Countdown is not something we'll likely ever prioritize for new features.

While of course one can always specify events in terms of one's own time zone, it's an extra step, and can easily be forgotten.

Would be great if there was a checkbox and a pulldown menu with time zones for all such inputs.

I think this is reasonable to add to date controls in the very long run, but suspect few users routinely create events or countdowns in non-local timezones.

How do you currently schedule an event in UTC in other software?
I can't figure out how using Google Calendar -- I can't find any option in this dropdown which let me, but maybe I'm just overlooking it? There are approximately 9 million options. I looked for "International", "UTC", etc.

While my text was specifically about UTC, this wasn't meant to be a special UTC problem. To be fair, google isn't user friendly about UTC either, as you said you are able to select tons of time zones, of which UTC is none. So if I'd really need to set UTC, I'd go to a wikipedia list of all time zones equivalent to UTC all year round, choose one time zone from this list and set that in Google calendar. But that's just for the special case when it comes to UTC, other time zones can just be selected from the list your screenshot shows. I tested recurring events at Google calendar too, they are locked to the time zone specified in the event, just as I'd expect.

I can't figure out how in Calendar.app either -- I don't see any way to change the timezones of an event. 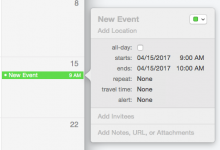 I just tried to figure out what Calendar.app IS at all, because though I've heard that name a few times before, I've never really used or seen it. While google wasn't really helpful ("Are you looking for the Google calendar android app?") I think I now got that this is the default calendar app on macOS. However, I won't be able to say anything about that software, as I don't own a mac but am working on Kubuntu.

In general, you're right that this task may solve that problem well. I'd guess it wouldn't be that hard to lock recurring events to the time zone selected in the event options, but creating the possibility to select those in the event options is the bottleneck here.

I'd think that what I pointed out is slightly more annoying than what is outlined in this tasks description. Agreed, when creating a single event at a given time in another time zone, it'd be nice not to have to think about calculating the same point of time in my time zone first, afterwards creating the event with that date. While that one needs me to pay attention when creating the event, recurring events are just awful: When creating those (given they recurr often and long enough) I'll at some point have to deal with daylight saving times, and I (Europe/Berlin) won't be able to set that event locked to the daylight saving times in e.g. San Francisco without changing my personal preferences before creating the event (and changing them back afterwards).

I'm just trying to understand whether this is a common problem that all users of Calendar software routinely experience, or a problem that is experienced much more strongly at WMF that by most other users.

In my personal experience with event scheduling I've never wanted to schedule an event in a nonlocal timezone, and wouldn't consider this feature important.

This doesn't mean it isn't important for you, or that we shouldn't implement the feature, but helps guide what it should look like and how high a priority it is to implement.

Just to clarify this: This request is not meant to be about scheduling in UTC in special, but about scheduling in different time zones in general. As you already showed, there is support for scheduling in different time zones in general in Google Calendar. Yeah, most people don't use UTC, but that was just an example. I could've written my request with the very same intention without mentioning UTC. That said, I'm not opposing to your opinion that "this is not an important feature for most users". But as your comment explicitely mentions there is no support for scheduling in UTC in Google Calendar I felt I should clarify that what I wrote is not specifically about UTC, but generally about time zones.

This doesn't mean it isn't important for you

To be honest, it's not even important to myself. But I've come across a single event where this made the events showing off wrong dates and needed about an hour of testing to figure out why that is and how I can work around this. It also took that long because I couldn't find any documentation about how I should expect this to work. After I figured out why it does this (and others told me this likely is a bug) I just wanted to document this somewhere. That doesn't mean I expect you to put this on high priority.

Do you routinely schedule events in timezones other than UTC or your local time? If so, why? (For example, do you frequently travel between two timezones? Do you schedule events on behalf of a team that works in a different, non-UTC timezone?)

Do you routinely schedule events in timezones other than UTC or your local time?

I originally posted this feature suggestion because I needed to put a tradeshow event in the calendar. The tradeshow took place in another time zone, and when I got there I realized that the calendar entry was on the wrong day. I also frequently schedule conference calls with clients and suppliers in other time zones.

Currently the team has moved to using google calendar instead, not really because of this issue, but more because of the convenient mobile interface.

KDE has some interest in this as our contributors are distributed around the world.

Small button next to the time selection to open timezone settings:

For recurring events, this looks slightly different (start/end timezone must be the same in that case).