Ref T11957. Needs some more polish, but I think everything here is square.

Not sure how much of this is still in flux, but design stuff: 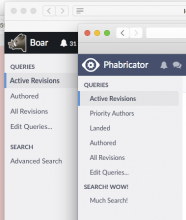 The 'only' stuff is when you visit /home/. This is relevant for mobile. The way this works now is:

For example, on this install: https://secure.phabricator.com/home/ -- same as /, but no left menu.

So what we do with this depends on how you want the mobile UX to work.

The PhabricatorGlobalUploadTargetView stuff specifically avoids activating "drop files here to upload them" when you're viewing the mobile version of home. I think the behavior doesn't hurt anything, but it's not meaningful on mobile.

the nav spacing was my comment above "fix alignment on non-icon navs items."

I feel good when design stuff which feels a little off to me is really just unfinished and not some kind of next-level cutting-edge new-age design which I don't "get".

How did we want to explore renaming?

Some options I can come up with are:

I personally tend to favor doing nothing. I think the names aren't a root problem: Atlassian and AWS both have application names like we do (Atlassian "Confluence" is a wiki, "Route 53" is a DNS service) and are industry leaders. I think Apple is almost the only major company that does not do this (maybe?), and even they do in some cases ("Garage Band", "Final Cut", "XCode", "Safari"). I think complaints about this are relatively rare and they are symptoms of other issues, like overall roughness in NUX and users just not liking new stuff and looking for something to complain about. Administrators can also perform this rename themselves if they want.

Even GitLab now has "Pipelines", not "Builds" and "GitLab Geo", not "Gitlab Server Clustering".

Swapping the names is an easy step to leave hints in place, but I think renaming "Differential" to "Code Review", but then linking to a page that says "Differential", risks making confusion worse. We could make it say "Differential (Code Review)" but that's feels kind of questionable and ugly to me. We could maybe go half this far and add tooltips or something on Home, or iterate on the design to get a second line of text back. But I'm not sure those are worth pursuing.

Fully renaming things is possible, but will take a huge amount of effort and be tremendously disruptive and confusing to existing users. I don't think any name for some applications, like Herald, Spaces, or Drydock would make them more clear. I think there are a bunch of other good arguments for application names, and the only argument against them is basically "sometimes new users write angry tweets about them". It's definitely possible that this is legitimately a root issue that's turning away a tremendous amount of adoption, but my gut is that it's fluff.

(Offhand, I don't think I've seen these tweets from users who were clearly administrators who installed Phabricator: the ones I can remember felt more like users who didn't set it up themselves, and presumably were told to go use it by someone else? Maybe I'm misremembering.)

Mostly, I think this is inconsistent UX on our side. We're pretty good about making sure things are easy, well explained, and obvious. Things like the action menu, configuration, setup errors, are all very verbose, obvious, and simple to understand. I do understand all your points, but keep coming back to the very basic design experience principle of "Don't make me think".

I feel though like all these ideas aren't great. Like I don't think most need further explanation.

Truth be told I have a diff locally that removes serious business more for all boring all the time.

Not done, just pushing up for the night.

Truth be told I have a diff locally that removes serious business more for all boring all the time.

Tooltips are in, but the animation is janky and our tooltips flake on and off dragging the mouse around the element. Would like some assistance in making these appear like butter if we're going to have them there.

I can counter-diff you for tooltip smoothness, hard to fix before this lands. Here are the issues I identified, and how I fixed them:

Also, kind of weird that these tooltips show up for all Application menu items, including in Projects. Maybe consider a rule like this:

we could probably allow custom tooltips as well

It would be fairly easy technically, although I'm not sure it would see much use (if the item is custom, presumably you just give it a meaningful name?). Any information in a tooltip won't currently be available on mobile, too (and I don't see an easy way to make it available, at least without design changes).

If we do make it context sensitive, it gets a little weird that extensions won't be able to anticipate new contexts: if you write a custom item today, you'd have to hard-code it to do something weird (and probably something that "knows" about the Favorites menu) if you want it to have tooltips. It would be better if custom MenuItems didn't need to have any knowledge of the Favorites menu, so they don't break when we introduce "Favorites v2" or "Personal Efficiency Console Menus" or "Phriction CMS" menus or Phame blog menus or whatever. We're already exposed to this a little bit, and there are some remedies for it, but they increase complexity more.

Still having "selected menu item" issues, but haven't looked into it yet. Home is hardwired on global, so it doesn't just magically appear on mobile which I think is slightly better for me at least, since we're adding Dashboards. I assume maybe even we can remove the "Install to Home" action, since you can just add any Dashboard and (eventually) drag it to the top. This will stop people from "losing" the default we ship with?

Yeah, I think we should get rid of "Install to Home" and just write a blog/guide about upgrading -- I think this menu mechanism is just better/clearer/more flexible in pretty much every way. We could maybe migrate existing installed dashboards to become menu items automatically, but that doesn't feel tooooo necessary since we're shipping it alongside new stuff and I think most installs will be happier to play with the new stuff than frustrated by needing to reconfigure a home dashboard.

(If we did want to replace it, the flow could go "Install to... > choose a project / favorites / home > choose global / personal > it adds an item for you", but I'd like to see evidence that "Edit Menu Items > Dashboard" isn't clear enough before we build that.)

i do want to replace the flow, but as part of Dashboards / Search Action UX... it can come later.

I think I should go ahead and build a migration now for this though, change everything in one swoop.

can you once over the migration script for me?

Looks pretty close. You can run this migration locally to test it like this:

Every time you run it it will add another item to the menu, but that's fine. Should be fine to run a ton of times until it works well since it doesn't delete anything.

I ran it and I think nothing broke. Can you test it?

Yeah, sending them to MenuItem to add their new dashboard is kind of a crap experience, given there are hundreds of thousands. Hard to find ones you made.

I think T12174 captures everything I'm aware of, I can shoot you followups for some of it. Do you want to kick this in as-is and then we can fix it up on T12174?

This revision is now accepted and ready to land.Jan 31 2017, 4:18 PM
Closed by commit rP5760e499b729: Redesign Home/Profile/Projects side navigation (authored by chad). · Explain WhyJan 31 2017, 4:46 PM
This revision was automatically updated to reflect the committed changes.