I suspect this is because the private subnet is still using the block001 route table, which uses an IGW. I'm building a new route table to see if that fixes things.

I'm going to try just relaunching the test host since I suspect this might be a route caching issue or something like that and I don't know enough about CLI routing commands to tell, but I do know how to turn it off and on again. I also can't, e.g., install traceroute since I can't reach the package server on the public internet.

I'm out of obvious buttons to click so I'm going to read the NAT Gateway documentation.

To ensure that your NAT gateway can access the Internet, the route table associated with the subnet in which your NAT gateway resides must include a route that points Internet traffic to an Internet gateway.
http://docs.aws.amazon.com/AmazonVPC/latest/UserGuide/vpc-nat-gateway.html

See also this diagram -- note that the NAT gateway has been drawn inside the public subnet: 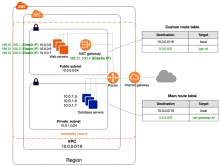 I'm going to try launching a new NAT gateway in the public subnet, then changing the route table to use that gateway instead.

So I think we could do this, instead:

The worst case if that doesn't work is that we fall back to the "move everything" plan and moved a couple of simple services we didn't really need to move, but I'm pretty sure it will work since I effectively just did it on the private001 subnet (that is, there was nothing making it inherently "private").

As this pertains to T12798, I'm inclined to launch repo025 into the existing subnet and plan on trying the "public + move vault/bastion + swap to NAT" plan at a later date. It seems like there probably aren't too many dependencies/interactions between the two changes.

Since I don't plan to launch repo025 into a separate subnet, I'm going to clean up these resources:

I cleaned up all that stuff and it doesn't look like I broke the world.

It also seems possible that this reduced-complexity approach might work:

But even if this did work, I think it's worth the effort to separate the subnets -- we don't get anything super concrete out of it, but feels much cleaner from a general security/isolation viewpoint.

I think the next steps are:

I think this plan of action should mostly be independent of other work, and the only immediate benefit is the ability to provide a stable address range (T11336). I suspect it makes sense to pursue before we do any actual work on hardware for private clusters, but doesn't otherwise need to happen particularly soon.