This is the current NUX on Phacility: 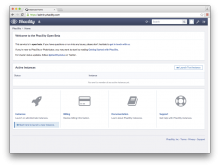 After they've launched their test instance, they almost certainly want to start a real instance (or close the browser and never come back if they hated Phabricator, I suppose). However, the blue callout vanishes. So we don't have a "next step" cue.

If a user who is a member of a real instance shows up here, they almost certainly want to use their instance, and are very unlikely to want to launch a test instance. But the button is fairly inviting.

Maybe the left button should be "Launch Instance", and take you to a modal choice between "Test Instance" and "Standard Instance" (although I think this UI element doesn't look right if we only have two options right now)? I don't love putting more steps on this workflow but this feels relatively reasonable to me.

Then "Launch Test Instance" can be "View All Instances" and take you to the browse UI, maybe.

Finally, we can pull cueing up top:

We just got an instance like testnumber1 created as a standard instance, so I think this is definitely less clear than it should be. But the new "you can use numbers in your isntance names" stuff works!

(No one but me has actually launched a test instance yet, so it's possible that the workflow only works for me and/or is impossible to find.)

I played some with it this weekend and yeah it's a little odd that test instance is so high and real instance feels buried (I was already working on this, so I grabbed the task). I've been rebuilding PHUIActionPanelView and hope to have it in a decent state tomorrow and new Phacility NUX after.

Cool, sounds good. Definitely no rush on this, I just had the same feeling of things being odd.

Not exactly related, but I also want to:

Anything else we want to do here?

I think we're good on the actual Phacility flow, seems like users aren't running into the same problems they used to (e.g., confusion about ""test" instances").

Kick test instances out of the staff dashboard active instance count (the count currently includes them, so this number's going to be a bit odd until I clean that up).

D16082 eventually did this, moments ago.

Hasn't actually seemed too important. Easy to add if I need it later, zero impact on NUX anyway.