Which circuit breaker powers the smoke alarms? None shall ever know, for every breaker was marked "OLD BATHROOM GCFI.docx.v2.REAL.bak.bak~" when the house was purchased.

It would be easier to figure out if I could plug something in, like this tool for figuring out which breaker powers something which I already own (although I've had mixed luck with it). But the connector that's currently wired in is a big molex-ish connector that I can't get alligator clips on.

I purchased this smoke detector connector adapter, intending to cut it up, wire that to a plug and then go Live Wires → Adapter → Plug → Circuit Detector. It arrived and isn't remotely close to fitting, it's like twice as large as the wired connector.

The practical solution here is probably to stand on a rubber mat and just carefully get the live wire into a Wago connector, but after some consideration I realize that they sell a "DIY" BRK Connector Male Adapter for the steep-but-not-unreasonable price of $14. 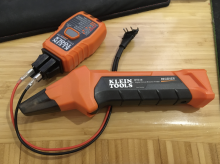 This connector has a 4mm pin pitch, but I had a great deal of difficulty finding a likely-seeming bare connector with a 4mm pitch. After resigning myself to a Digikey quest for a connector that will fit a board on T13692, which also has a "4mm" pitch I realize the pitch is probably not 4mm but 3.96mm -- a wonderful pitch for which many connectors are readily available.

This is likely a JST-VH 4 Pin connector.

I traced the alarms back to Breaker #8 in Panel #2 (the detector tool actually worked okay this time). I disconnected the breaker and verified that killed the circuit. I swapped the alarms and updated the map of known breakers with this new information: