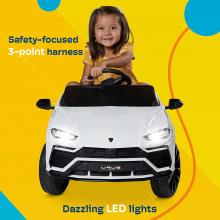 ...but they are large (won't easily fit in an Audi Q3) and heavy (roughly 40 pounds). We live in the city on a steep hill, and I don't have a practical way to get one of these somewhere where they'd be safe and fun to drive. For now, we spend two hours in the car to pay $30 to stand in line for 10 minutes to drive one in a circle for 5 minutes.

I looked for one that's built more like a dune buggy or Go Kart, imagining it might have a frame that could be folded (or made foldable) and/or taken apart quickly, but didn't have much luck finding anything that looked promising.

I did find these "Hover Karts", where you strap a simple frame to a hoverboard: 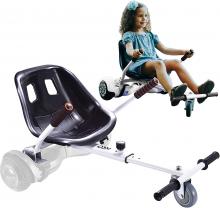 These are relatively portable: the hoverboard is ~12 pounds, the frame is ~12 pounds, and the pieces come apart and can fit in a large backpack and reassemble in a couple of minutes.

However, there are some safety issues for a small child. In particular:

In theory, these problems can be fixed in software.

Hoverboards usually have two brushless DC motors. To drive brushless motors, you need a motor driver / electronic speed control (ESC). The hoverboard I bought has hall sensors on the wheels that give an ESC which supports them better control of the wheels (and you can read wheel speed, etc.) so I want an ESC that supports hall sensors.

There don't seem to be a huge range of options for these at higher voltages. They're fairly available at drone / rc-car voltages (but usually sensorless), but hobby drones usually top out around 6S (~25V) and these are 36V motors.

I did find some. I started with these RioRand Controllers that cost $17 on Amazon. (These are widely available on Amazon / AliExpress under a hundred different brand names, but they all look like the same board.) I've had some success with these:

However, they also have some issues:

Here's a YouTube video of someone getting useful behavior and speed readings from these ESCs: Mad-EE RioRand Motor Controller.

I assume this difference in outcomes is entirely me not knowing what I'm doing, but I have so much weird behavior that it seems possible that I just got bad boards that a forklift sat on in the warehouse or something.

I ordered a replacement red board from "another" "different" manufacturer and this one looks better -- no smushed capacitors, and no solder fill or headers in the through-holes for PWM. So I'm going to try to find a 2mm pitch 5-pin locking connector, wire up the new board, and see if I can make sense of the speed signal once the oscilloscope shows up.

There are also some other similar low-cost boards on AliExpress:

I ordered some of these but they won't arrive for about a month.

A couple tiers up, there are ODrive and VESC boards. I think the VESC stuff, particularly, is aimed more at drone hobbyists who want a more plug-and-play component for a vehicle with a generally well-understood control scheme and mostly-off-the-shelf components.

These boards are substantially more expensive -- the ODrive S1 doesn't seem to be available (but would be $150 for both motors), and the ODrive Pro is $230+ per motor. The cheapest VESC-compatible board I can find immediately is the FSESC4.20 at $175 for both motors.

I also found this project somewhere in the middle: NearZero2. This looks pretty much ideal for my needs, but isn't available for purchase until early 2023 because of the chip shortage. Specifically, it seems like the L6234PD isn't available (0 in stock at time of writing, expected delivery in 2040).

The NearZero2 and VESC are fully open source, so it's possible I could build a "NotQuiteZero2" using a chip that's available. This is exciting in theory but feels like an impractical project given my current skill level and available time.

The NearZero2 seems slightly more realistic to build, and is generally a more attractive driver to me, but I suspect completing a working board before humanity begins producing microchips again is far outside the realm of possibility.

The capacitors on both boards arrived pretty banged up. 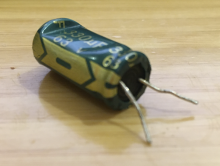 It's a little squished, but still tests at 315 µF. A poor craftsman blames his tools.

I bought an oscilloscope and tested the speed signal of one of the new red boards once it arrived. The scope showed the perfectly sensible signal I expected, and the signal came off the board fine once I hooked it up. So maybe the first couple boards were legitimately bad?

But the new red boards still have at least two significant problems:

I also broke the body of the hoverboard while clamping it, so I'll have to figure out how to build a new frame.

The yellow boards have a "CW / CCW" 3-pin jumper that presumably sets motor direction, and come with a small potentiometer attached. They have an optional PWM input, but don't appear to have a way to get hall sensor signals off the board.

If this is an earlier revision of the red board it's hard to imagine it will work better, but who knows. I'm waiting for some 3.96mm pitch connectors now (see also T13694).

No great surprise, but the blue boards seem about the same as the red boards and have the same problems:

These numbers were at 18V. As soon as I connected the 36V source, something on the board turned into magic smoke and a fuse blew. The VCC-to-ground resistance is now 1 Ω. The listing explicitly says "36V" but it seems that is perhaps optimistic.

The red board can hit ~1K RPM forward on 18V, although it also tops out around 500 RPM running backward. At 36V it can do about 2400 RPM forward (still just 500 backward), which is 45MPH so we won't definitely won't be doing that.

500 RPM is ~10 MPH, so definitely fast enough, although I'm sure it will behave differently under load.

I'm not hopeful about the yellow boards -- they look nearly the same as the blue boards and their pinout is a bit of a pain to work with -- but I can at least get one connected and see what happens. If that's no good, I'll try to fix the forward/backward issue by swapping the A/B/C windings for one motor, and try to fix the starting issue in software (e.g., by "wiggling" the motor if it doesn't start, or something in that vein).