As a Product Manager, I want to see a comparison of a current query to the same query from a previous point in time (such as the beginning of a quarter) so that I can:

An example of a report satisfying these use cases: 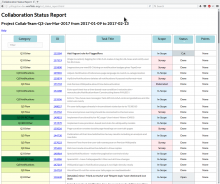 Implementation challenges: Some users want to query on a fixed time period, e.g., current quarter. However, the date that a baseline is established is rarely the first day of a quarter, but more likely an arbitrary number of days later. Other users want to report on a periodic basis, such as vs every Monday or vs every other Monday.