After upgrading to the latest phabricator the creation of non-hosted svn repositories has changed. It now has a series of CRUD interfaces, whereas it used to be a wizard. It is now significantly harder and error prone to create a new repository.

without fully reverting my install, the old workflow was something like:

I just went through the same process in the new workflow.

The biggest problem is how unstreamlined the process is compared to the old wizard. I feel like I'm back with a simple CRUD interface to a 3rd normal form db, instead of something that is intelligent about the actual human process. Not only that but the language has moved away from human-friendly terms like "hosted" vs "non-hosted" to "observe". The whole process is much more confusing, and I feel it cannot simply be attributed to learning the new way.

Adding the URI was the main problem here, and if the "create repository" step had prompted me for it like the old wizard did, I probably wouldn't have minded the new CRUD interface afterwards as much, even though I do believe it to be a step backwards in usability and readability.

I want to also stress that the new interface does not communicate the different options available very well. The old wizard had radio buttons with things like "have phabricator host your repo" and "host your repo outside of phabricator".

Once you hit the CRUD interface, there's absolutely no indication that anything can be done differently. You have to know what tabs to go to and what dropdowns to pick to then magically turn it into a non-hosted repo. 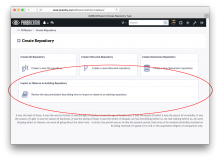 Not only that but the language has moved away from human-friendly terms like "hosted" vs "non-hosted" to "observe".

This was changed in response to a user having difficulty understanding the old language. See T9679.

Thank you for the timely response. I'm glad to hear you're thinking about this. I still have many concerns about this that I hope you will consider.

Here's what I have, which possibly contributed to my confusion.

@ofbeaton How can we make the bug reporting guide more clear with respect that we don't take bug reports on older versions of Phabricator? Nor do we take feature requests or feedback as bug reports.

These guidelines and rules exist so that developer time is spent working on Phabricator, not answering questions that don't exist at HEAD or have been previously discussed in other tasks. Providing free support is the largest cost that currently exists in building Phabricator.

We really want community members, especially frequent ones, to do their part in helping us build Phabricator. The easiest way to do that is following our Support Resources guide, due diligence in keeping up to date and searching before filing anything, as well as being mindful of the free product and free support you are receiving. If we allow people to ignore the guidelines and file anything, anytime, we'll be too overwhelmed with support to move Phabricator forward, and that's something we just don't want to do. See T9212 for previous discussions on this topic.

First I apologise if I somehow came across with any hostility, that was certainly not my intent.

@chad I personally don't think being a few weeks behind HEAD is unreasonable. I run stable updated once a month, which is already a week behind, and the documentation states this is the version Phacility runs as well. I thought this was pretty good updating on my part, but you make it sound like I'm a horrible administrator. I'm exploring ways to automate it, though I'm concerned of waking up to a broken install. Do you really expect us to be updating daily against a version phacility itself does not run?

If you are serious about wanting ideas on how to reject any submission from anyone not running HEAD, then add required version fields to the submit form and have it display a rejection the moment they put in a version behind HEAD.

I put a lot of thought to if this was a feature request or bug report, but since an existing workflow was changed from being clear, direct and understandable to in my mind; confusing, fragmented and ambiguous, I considered it a bug report, is that not correct?

You can be assured that I searched multiple times and went through over 10 ticket threads. This does not always reveal existing tasks or discussions.

I am more than sympathetic to your support costs, and the benefits we get from phabricator for free. Indeed I agree, I want to do my part in helping you build phabricator. In my mind, that includes reporting problems.

I didn't need help in figuring out how to do something, I managed that on my own. I reported a problem when a process was made worse and difficult to use. I have seen phabricator staff say well nobody has complained about this, so we don't see a problem.

Here is your complaint.

In general we want people to update if possible before filing a bug report. The reason is most real "bugs" are fixed usually same day reported. For example we had a recent "Repository is not attached" exception that was fixed same day, but we're still getting reports trickling in weeks later. Being on this week's stable is all we usually expect. HEAD of master is better, but not required.