This task is related to T11029 (improving diff email), but I think it is a separate and more urgent bug to fix rather than a long term improvement.

I'd be happy to propose a diff/pull request for improved layout if that's helpful, but I might not know about all the use-cases for this email and the way people want to use it.

I attach a screenshot of a commit email as shown on Thunderbird on OSX. You can clearly see the three different fonts/sizes, truncated and duplicated commit message and oddly formatted second paragraph.

Here's what this mail is generally expected to look like:

The middle section is the commit message rendered as remarkup, so it's expected that if you put **asdf** in a commit message you'll receive mail with bold text. It's possible that "We use cayenne..." might be indented two spaces in the raw message, then be formatted as a code block (giving it a monospaced style), and then not rendered with the background/border for some reason (because of your client?).

In most clients (here, Mail.app) code blocks should render in a style similar to the style used in the web UI, with monospaced text but on a grey background: 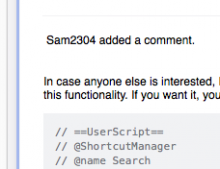 The email I received did not have mime parts. Instead it had these headings

and was completely base64 encoded. I'll look for a tool to decode it if you need, however I was able to extract the email from the server logs.

I note that my email settings are for HTML, but phabricator sent no plain text part as well.

From the server-side tool (neat tool by the way!), I extracted this:

I did discover that indeed there are two spaces at the start of the second paragraph. So remarkup is the culprit. It would be nice to turn that off since it is a little surprising in a commit message. Although it isn't too hard to avoid now we know it is there.

As for the additional (truncated) first line. Perhaps that makes more sense in a git world where it is common practice to have a short first line, limited to maybe 100 characters. I know github strongly encourage this sort of behaviour.

Finally, the change in fonts looks like it is due to the first time we see the commit message is it wrapped in a one row one cell table. And the second time it is wrapped in two divs and a p.

For my part I'd love to just get rid of that that first table and everything inside it. The author and commit number are in the email subject and from.

I know I didn't retrieve all the info you asked for, so let me know if you want to see anything else or want me to decode the base64 email body.

It appears that either your client just isn't rendering the background here, or possibly your MTA is mangling the mail in transit. But everything on our side appears to be working as intended.

Here are some steps you could take to change the behavior:

I know you have focussed on the missing background, but I'm not overly fussed about that. But I am surprised that the commit subject shown twice in a row, once truncated inside a table and once not, is anything else but a bug.

Users really want to read the same thing twice like that?

Well, its your project. As soon as I find the correct template file I'll adjust it and be happy.