Display comments in a Phabricator task as a tree view instead of quoted inline comments
Closed, DuplicatePublic
Actions

I'm not sure if a feature request has been requested for this before, but could it be possible to "reply" on comments in a way that is produces a visual "tree view"?
(Instead of quoted inline comments as given in https://secure.phabricator.com/T4119) 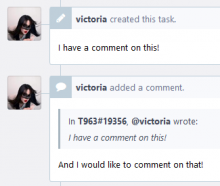 When discussions are held, the amount of quoted text can be dramatic for the eyes and it would be a visual improvement to introduce a sort of a tree. Even if the nesting is maximized to a two-level nesting (such as Facebook enforces), it might be a great improvement when it comes to legibility to visually group together sub discussions.