Tags
None
Subscribers
Assigned To
None
Authored By

When I open my team's phabricator install, the first question I'm usually looking to answer is, "What tasks & revisions am I not fully up-to-speed on?"

The activity feed and email/notifications help, but there's often too much noise.

My knee-jerk UI implementation would be to simply place a small icon next to "updated" objects... here I added a blue asterisk next to the task #: 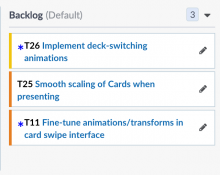 Once I view an object and return to the workboard, the 'updated' icon would go away.

The knowledge that I'm absolutely caught up to everything my team is working on and discussing... it's "inbox zero" for phabricator.

In tandem with this feature, the comments/changes history on a Maniphest task could have a visual indicator highlighting the point in time you last viewed the object (i.e. "everything below here in the history is new:")

This is exactly what notifications does now?

Specifically this statement could use clarification:

The activity feed and email/notifications help, but there's often too much noise.

The main concern with the proposed suggestion is it's a worse user experience to getting to "inbox zero". That is, in order to have gotten caught up on everything, you have to manually scan every task, every time. That's fairly inefficient, which is why notifications are kept in a separate list in a count. The entire reason we have notifications is to be the subset of all things you care about happening on Phabricator. If it's too noisy, I'd recommend spending some time in Settings to get it where you want it. (By default we notify you of everything so it does take some minor fine tuning).

Thanks for getting back to me Chad; I can also understand the reverse point you bring up, that such a feature could frustrate some users.

Re: The activity feed and email/notifications help, but there's often too much noise.

Since 6/7 items in this list were about T1, its easy to accidentally miss the notification in the middle that T2 was created.

For me, there are really only two things I want to know if I'm sitting down in the morning:

So, framed in the context of the Contribution Guidelines document, I suppose that's the core 'problem.'

For completeness, though, I'll just fill in the details of the use case that prompted me to open this task with a specific solution in mind:

Earlier today I went to the workboard for our my team's roadmap project. I was curious to see if any new discussion had occurred in any of its tasks while I wasn't paying attention. ... and then ... lightbulb ... I thought, it would be cool to know, at a glance, exactly which items I wasn't caught up on. Instead, I Cmd+Click'd to open each task to find out if I had missed anything (I hadn't).

Thanks for your time and the discussion. Phabricator is a complete joy to use every day! Thanks for all your efforts.

I'm going to merge this into T5891 which covers a similar, but more extreme example with "I went away for two weeks and OMG so many notifications".

chad closed this task as a duplicate of T5891: Add button to notification panel to concatenate notifications on the same objects.Nov 1 2015, 5:42 PM
• mholden added a comment.Nov 1 2015, 9:42 PM
Comment Actions

Sounds great. I like that task's title better anyways :)